I recently decided to spend some of my spare time on electronics projects. Why? Because I’ve always had an interest in electronics (even as a child, I booby-trapped my bedroom with pressure sensitive switches, trip wires, light bulbs (the little 3V ones) and buzzers) but my interest lay dormant for decades while I focussed on family, work and other interests.

So, when I set out to re-ignite the electronic pastime, I decided to focus on audio; I provide sound and light for a couple of amateur theatre/variety groups anyway so there seems to be a logical fit. I naively believed there would be thousands of people posting stuff on the internet about their electronics hobby and their projects. I was disappointed to find however that whilst there are a lot of posts and articles, most of them were written at least 8 years ago and the vast majority originate from across the pond (not that I have any real problem with the origin, just that “nipping down to RadioShack” feature prominently; what do we have in the UK? Maplin!). My current, almost complete, project is a battery operated amplifier with preamp. Apart from the obvious satisfaction of creating something, I designed it to give me a totally mobile (9V Battery or wall charger) box which I could use as a guitar practice amp but also amplify any source I desired (including, mp3 players and microphones). I will post more about this, including schematic and photos in the next post.

I’m amazed how many people ask me why I’m doing this stuff when I could just “go out and buy it”.  Does nobody get any pleasure out of making something themselves? Are electronics devices so readily available and cheap that the hobby has died a death?

My first project was to create a tiny ‘signal generator’ (for testing audio equipment). It’s so small that it all (including the battery, output jack and tiny loudspeaker) that it fits in an Altoids mints tin.

The generator, built with a 555 timer IC, a couple of resistors and a capacitor will actually generate signals between 6Hz and 620Hz. The short video above only demonstrates a small part of that range.

I’m not very good with Eagle or schematics in general but the following wiring diagram should give you an idea of what is involved if you want to make one. 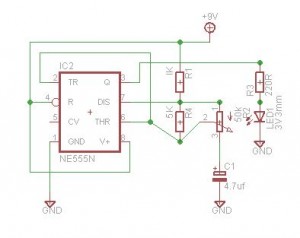 View all posts by standishgeezer